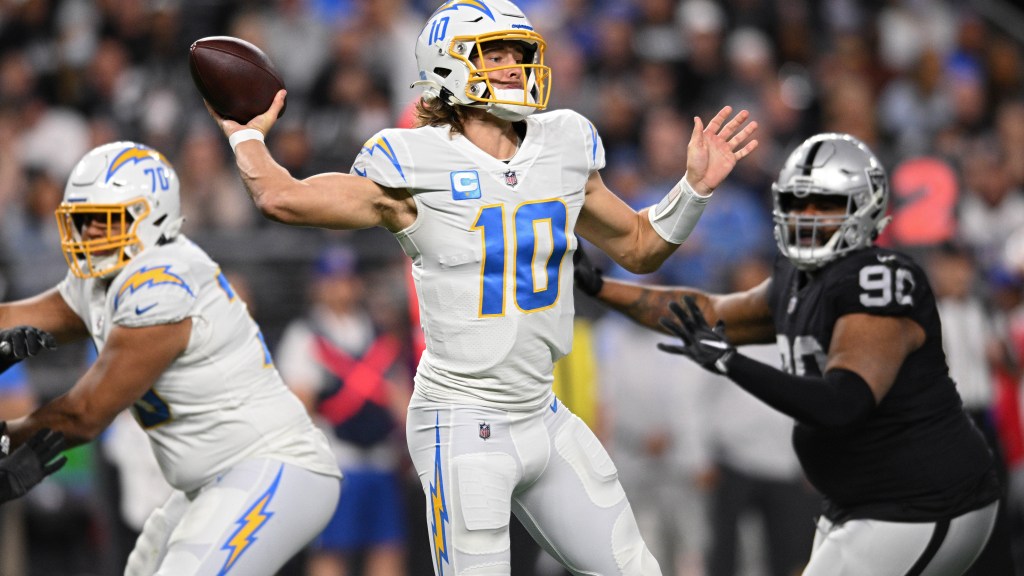 It can be helpful when analyzing an opponent to hear things directly from those who cover that opponent every day. This week, for that idea, we turn to Gavino Borquez at Chargers Wire.

Q: How much loss do you expect JC Jackson to have if he can’t go?

GB: Jackson being unable to dress would be a pretty big departure from what Brandon Staley wants the game plan to be. Jackson was signed this offseason to be the Chargers’ Jalen Ramsey: someone Staley can stay on an island and trust to win in one-on-one situations while the other ten defensemen lead their defense. Without Jackson, LA will have to use more area coverage or trust Michael Davis or Asante Samuel Jr. to win on an island. Considering these two were last year’s starters and led the team in chasing Jackson, I’d go for a heavy dose of zone coverage if Jackson can’t go.

Q: How motivated do you think the Chargers will be in this game from last season’s tough loss?

GB: It would be dismissive to say that it is not a factor at all. The entire core of last year’s team is back this season and will certainly be looking to prove they are the team to beat last season. Many players said the padded workouts earlier this week were among the most physical sessions of the season so far. But I don’t think the Week 18 loss to the Raiders will be the only motivator for LA. This is a team that has championship aspirations this season after adding Jackson and Khalil Mack. While looking completely beyond the Raiders on this quest is not recommended, I think the mindset of getting the gears going for such a run will outweigh the revenge aspect of things.

Q: We all know about the additions of JC Jackson and Khalil Mack, but what’s an underrated move from the offseason that could make a difference?

GB: In defence, I think the answer is Bryce Callahan. Most people outside the Chargers info bubble haven’t mentioned him much because he’s on the wrong side of 30 and usually the wrong side of injury, but he was the emphatic starter in the slot machine since arriving in Los Angeles on the likes of Samuel. , which many expected to be an exceptional year.

On offense, I think it must be receiver DeAndre Carter. A small salary signing to replace Andre Roberts at kick return, Carter has flashed as a receiver this offseason and should have a big role as a WR4 this season for the Chargers. Especially as a threat of speed, both laterally and vertically, Carter gives the attack an extra dimension that it lacked especially last season.

GB: Most of Herbert’s development trajectory at this stage is based on creativity. A profile on Herbert de The ring detailed how good the Chargers’ face is as a decision-maker — even under pressure, Herbert’s turnover-worthy play rate was the best in the league. But some of the pre-snap tweaks are still in the works: checking games, fixing protections, some of the minutiae of where the best in the game really make their money. Herbert also ran the offense as it was scripted last season – more freedom this season to put his own spin on things will only open things up even more.

Q: What is a weakness in the Chargers that the Raiders would be smart to try to exploit?

GB: Offensively, it’s the right side of the line. It’s a weak spot for many AFC West teams, with Chargers starting rookie Zion Johnson at right guard and Trey Pipkins at right tackle. Although Johnson looked solid in the preseason, this is still his first game in the NFL; with Pipkins, the story will be how his first stint as a full-time starter goes. Especially with Maxx Crosby lined up on the right side, the Raiders would be wise to find ways to get Pipkins to an island.

Defensively, it depends on the availability of JC Jackson. If he’s out, targeting Michael Davis and Asante Samuel whenever they’re paired with Davante Adams would be wise. Attacking in the middle with linebackers in zone coverage would also be a good idea. But if Jackson is playing, the defense’s weakest point is probably the linebacker corps. Bring in a few extra blockers to ensure a clean exit to the second tier and let Josh Jacobs and the running backs have a treat.

Thanks to Gavino Borquez for answering my questions.