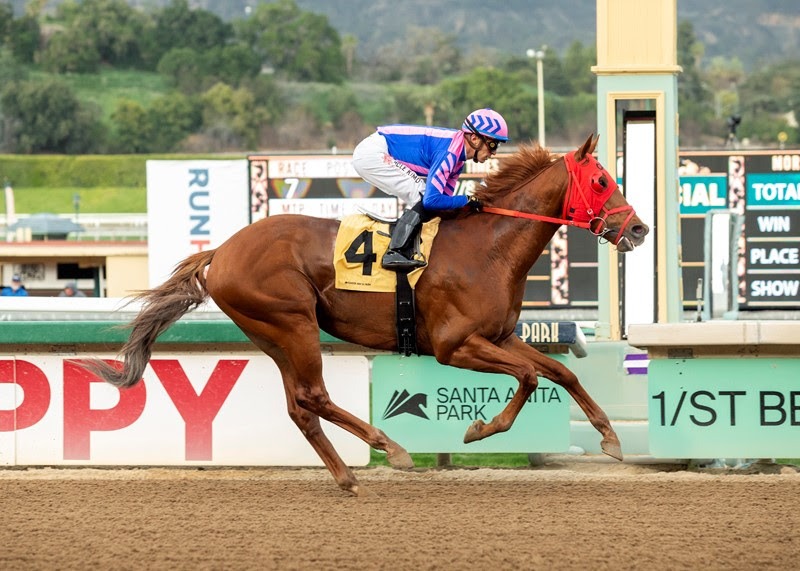 ARCADIA, Calif. — Could his incredible speed allow him to travel a land route? That was the question Alfred Pais’ Brickyard Ride faced on Monday at Santa Anita as it spanned a flat mile in the $100,000 Tiznow Stakes. It took about a minute and a half, but the question was answered resoundingly, because the 5-year-old chestnut horse of Walk to the clubhouse won a slow 7½ lengths under regular rider Juan Hernandez, who would score his third victory of the day in the next race. Trained by Craig Lewis, Brickyard Ride stopped the clock at 1:37.77.

Sponsored by the CTBA, the Tiznow is part of the lucrative Golden State Series for eligible racers of California pedigree or sire.

On January 15, Clubhouse Ride, attempting two turns on dirt for the first time in his 20th career start, edged Wilder Than Most into turn one and from there he was loose on a comfortable lead, opening some eight lengths on a meter as Hernandez prepared him for the final approach.

“Well, he always hit me like a two-trick horse. When we chased him after Del Mar, I always had that race in mind. It has a high cruising speed and the good ones usually do. They do it their way. I’m not saying he’s (their caliber) but horses like Life Is Good and Knicks Go, but when they hit 46 it’s like another horse hitting 48,” said owner and breeder Albert Pias. .

Descended from Southern Image mare Brickyard Helen, Brickyard Ride, winner of last year’s Grade II San Carlos Stakes, recorded his fifth Stakes victory while improving his overall CV to 20-10-1-2. With the winner’s share of $60,000, he increased his winnings to $620,977.

Last in the race at the first corner, Touchdown Brown raced through a Tiring Wilder Than Most to finish second by 4 ¼ lengths. Off at 5-2 with Kyle Frey, Touchdown Brown called $3.00 and $2.10.

“It broke nice and I thought ‘Okay perfect, it’s going to relax perfectly’, but then it felt the pressure of (Wilder Than Most) it started to peel off. So I got it a bit let go, because sometimes when you do that he loosens up. But today when I let go of the reins on him, he flew off, so I had to tighten him up a bit. In the back, he was galloping and he won so easily,” said his jockey, Juan Hernandez.

Ridden by Flavien Prat, Wilder Than Most was 9-2 and called $2.20 while finishing 6 ¼ lengths ahead of Peaceful Transfer.

“He broke well and went pretty quick in the first quarter,” coach Lewis said. “It looked like Prat had tried to send his horse with him, but he got caught off guard. In the back my horse was cruising and heading home I started to feel pretty good. When they hit the eighth pole, Juan looked like he was starting to slow him down, so I felt pretty comfortable. The purpose of trying this was to give us options and he got away with it. He’s obviously a very good horse so we’ll see what the future holds. When asked if G2 San Carlos might be next, he replied, “It’s not out of the question.”

Live racing resumes with the first tee time for an eight-race card Friday at 12:30 p.m.