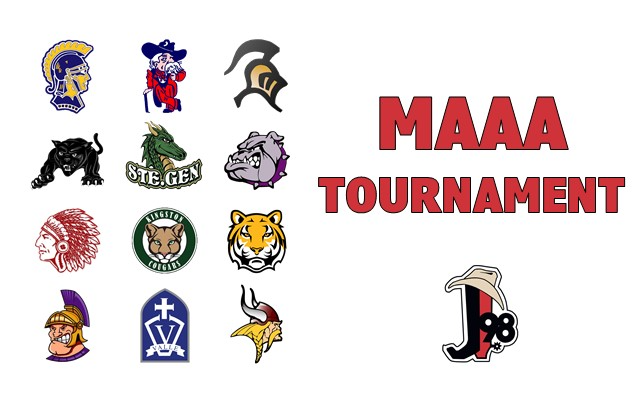 Defense was the name of the game in this one. It was 9-9 at the end of the first quarter and tied at 20 before the break with four lead changes in the first half.

Farmington outscored West County 11-6 in the third quarter thanks to seven points from junior Angie Davis.

The Knights led the rest of the way to qualify for the Conference Championship Game. Farmington junior Jade Roth was Farmington’s Applebee player of the game with 13 points.

In the second semifinal, North County survived a late push from Central to advance to the MAAA Tournament Game 45-43. It was a home and away game for most of the first half. It was 13-13 after the first quarter after a ridiculous shot from Khloe Dishbein.

Thanks to some excellent play from Alyssa O’Connor, the Rebels were able to take a one-point lead in the locker room at halftime.

The second half was a different story, as the North County Lady Raiders managed to create some separation with the Rebels.

The Lady Raiders were able to extend their lead to as much as 10 points in the fourth quarter.

Central managed to close the gap and lost 2 points with 30 seconds left on the ball. Dishbein had a chance to tie the game but was called for a move when she moved towards the basket. On the other hand, Hannah Politte made two free throws to seal the victory for the Raiders. North County moves to 16-4 and will face Farmington in the championship game tomorrow night at 5 o’clock. Central drops to 15-4 and will face West County in the 3rd place game tonight at 2 p.m. We’ll have the Fliegs Equipment Pregame Show at 1:45 tomorrow on The Boot and online at MyMoInfo.com.

Interview with Rusty Sancegraw of Farmington: