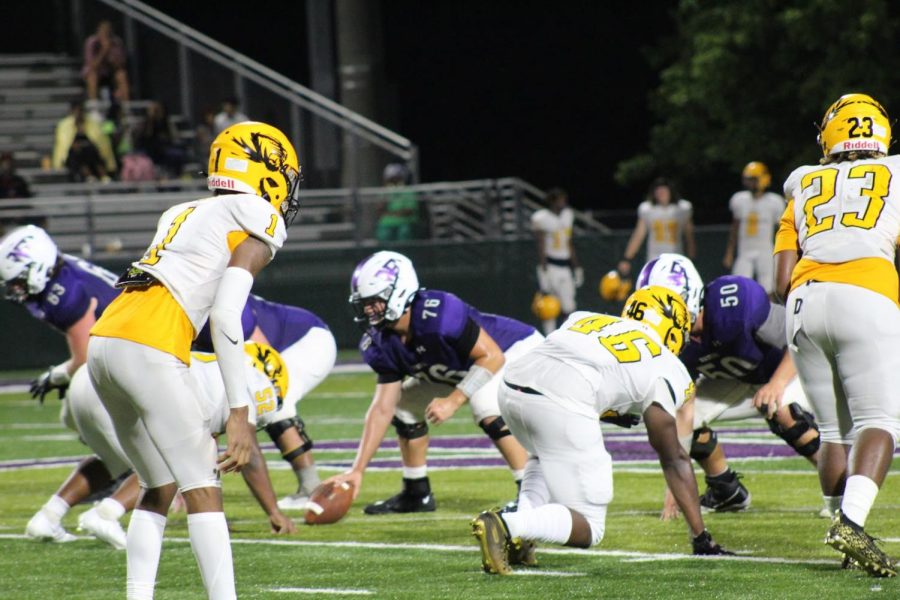 North Forsyth’s side showed great determination heading into the game against Alcovy. (Photo by Mikayla Matthews)

In the first quarter, the game started off strong for the Raiders as they adopted an attacking stance and pushed the Tigers back several yards in the opening minutes. The student section showed their spirits by donning red, white and blue for the military appreciation night and packing the booths. The first touchdown of the game was scored for the Raiders, bringing the score to 6-0 with five minutes remaining in the first quarter. Collin Miller, # 52, displayed determination and drive as well as high levels of skill throughout the start of the game.

The first quarter ended with North in the lead 6-0.

In the second quarter, the Alcovy Tigers put pressure on North as they moved around to score a touchdown which put them in the lead as they also scored an extra point from the basket. This brought the score to 6-7. The Raiders scored a basket with 29 seconds remaining and at halftime the score was 6-7.

The streak continued for the Raiders heading into the second half, and in the third quarter a touchdown was scored that brought the points 16-7. Two more touchdowns were added for North and midway through the final quarter the score was 30-7. In the final 7 minutes of the match, both teams showed great determination, but North Forsyth took the win with three touchdowns, bringing the final score to 37-7.

This match was Coach Craft’s 75th victory, and after the match his players gave him a gift to commemorate it.

â€œI haven’t played any games in those matches. It’s all about the players, â€commented Coach Craft.

North’s varsity team will continue to play throughout the season, with the next game taking place this Friday at Harrison High School.