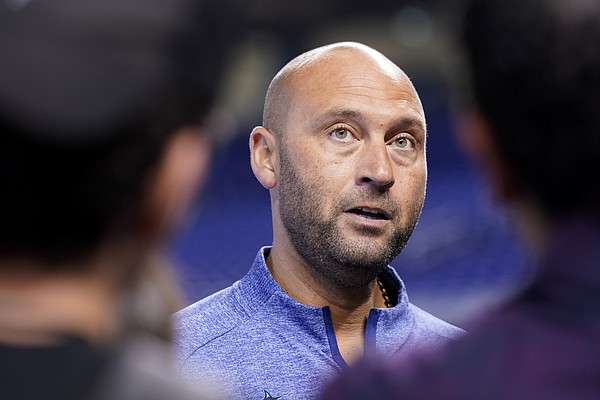 Derek Jeter announced Monday a surprise departure from the Miami Marlins after 4 and a half mostly unsuccessful years that failed to live up to his success as a New York Yankees player. Jeter became CEO of the Marlins in September 2017 when Bruce Sherman bought the team from Jeffrey Loria. A five-time World Series champion during a playing career spent entirely with the Yankees from 1995 to 2014, Jeter was voted into the Baseball Hall of Fame in 2020. Miami went 218-327 in his four seasons at the helm, finishing with a one-time winning record at 31-29 in the pandemic-shortened 2020 season. In full seasons under Jeter, the Marlins went 63-98, 57-105 and 67-95.

The University of Mississippi has extended Vice Chancellor for Intercollegiate Athletics Keith Carter (Perryville) to a four-year contract worth $1.1 million per year. The school announced the new agreement on Monday, saying it took effect in January. Carter took over the athletic department in 2019. “Ole Miss is a special place, and I’m humbled and honored to hold this position,” said Carter, who played basketball for the Rebels. “I feel a real sense of responsibility to ensure that our department succeeds at the highest level.” Ole Miss also launched a $350 million fundraising campaign to renovate sports facilities.

Art Briles’ tenure as offensive coordinator at Grambling State ended less than a week after he began. The former Baylor coach says he doesn’t want to be a ‘distraction’ at the prominent HBCU with a legendary football program in northern Louisiana, quitting the program just five days after surprisingly being hired by the Coach Hue Jackson. “Thank you for giving me the opportunity to be part of your coaching staff at Grambling State University,” Briles, 66, said in a statement Monday. “Unfortunately, I feel my continued presence will be a distraction to you and your team, which is the last thing I want. I have the utmost respect [for] the university and your players. Briles, the father of University of Arkansas offensive coordinator Kendal Briles, was fired in 2016 by Baylor after an investigation concluded that he and his staff had taken no action against players named in the sexual assault allegations.ESPN first reported that Briles would not be coaching at Grambling.It was not immediately clear whether Grambling had asked Briles to quit or if the coach had done so on his own .

The Las Vegas Raiders and Jacksonville Jaguars will open the 2022 NFL preseason schedule on August 4 as part of the Hall of Fame game. Former Raiders wide receiver Cliff Branch and defensive lineman Richard Seymour will be inducted into the Pro Football Hall of Fame on Aug. 6, as will the ex-Jaguars tackle Tony Boselli. This will be the Raiders’ fourth appearance in the game and the Jaguars’ second; Jacksonville’s previous appearance was in the Jaguars’ first NFL exhibition game in 1995. LeRoy Butler, Sam Mills and Bryant Young, along with coach Dick Vermeil and contributor Art McNally are also listed this year on the list of players of the modern era.

Bryson DeChambeau pulled out of the Arnold Palmer Invitational on Monday, saying he didn’t want to risk further injury to his hand and hip because he wasn’t fully ready to defend his title at Bay Hill. DeChambeau has not competed since retiring after the first round of the Saudi International on Feb. 3. The previous week, he had missed the cut at Torrey Pines. “Man, tough decision right now,” DeChambeau said in an Instagram post. “I have a lot of work to do to get everything back in order this week. I just feel like it’s too short for me to get back to 100%. Right now I’m at 90%. I don’t don’t want to go out and hurt myself more and not be 100 per cent for the rest of the season.” DeChambeau said he will try to be ready for the Players Championship next week. He said he was able to hit golf balls in a simulator but it wasn’t “comfortable”.https://www.arkansasonline.com/news/2022/mar/01/off-the- wire/”It’s not ready yet,” he said. He suffers from a bone bruise on his left hand. And he said he hurt his hip slipping and falling in Saudi Arabia.

The Americans suffered the biggest defeat in Europe at the Ryder Cup last year, and their new captain sees little need to change. Zach Johnson was introduced on Monday as the 30th USA captain, the next in line to try to end three decades of Ryder Cup loss on European soil. Johnson was still in high school in 1993 when the Americans won at The Belfry. Expectations have never been higher given their 19-9 victory last September at Whistling Straits behind a young team with perseverance. The 2023 matches are at Marco Simone in Italy. “I love going out there and competing. I love stretching. I love being uncomfortable,” Johnson said. “It’s going to be tough. But it’s also a great opportunity to go out there and give those guys an opportunity to be themselves and play with freedom and that’s kind of how I’m going approach it.” Team USA went from eight automatic qualifiers and four captain’s picks to six each when the last Ryder Cup was postponed due to the coronavirus pandemic and there was so much uncertainty with the PGA Tour schedule. Johnson said that would remain the same for 2023 — six qualifiers, six picks. He also said the points system would remain the same, with points available this year only at the four major tournaments, the Players Championship and the only World Golf Championships event now on the schedule.