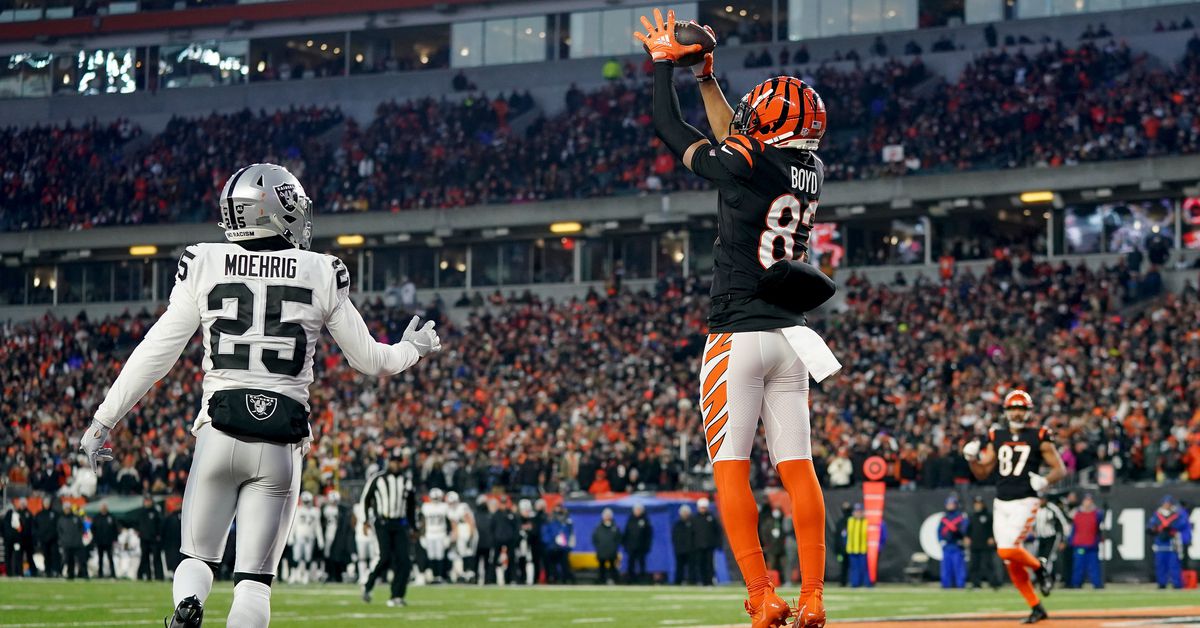 The Las Vegas Raiders’ season ended with a 26-19 loss to the Cincinnati Bengals Saturday night but, in typical 2021-22 Raiders fashion, the loss sparked some controversy.

On a third-and-four late in the first half, Bengals quarterback Joe Burrow rushed to his right and ended up throwing a touchdown pass to wide receiver Tyler Boyd. However, there was a whistle that was heard over the broadcast as the ball was in the air.

This should have resulted in a replay of the third attempt and taking the touchdown off the board, but the referees regrouped after play and the points stood. While said decision sparked drama surrounding the outcome of what was a one-possession game, Walt Anderson, Senior Vice President of NFL Officiating stood behind the call of officials in an interview with PFWA’s Paul Dehner.

PD: “Can you tell us about the conversations that took place on the inadvertent whistle during Cincinnatti’s touchdown in the second quarter?

WA: “We confirmed with the referee and his team on this play, they determined they had a whistle, but the whistle for them on the pitch was blown after the ball was caught.

PD: “So they didn’t think the whistle was blown while the ball was in the air?”

WA: “That’s right. They didn’t feel the whistle was blown until the receiver caught the ball.

PD: “Where does the whistle come from?

WA: “It was one of the officials on the ground who denounced.”

PD: “Do you know if it was the back judge, or who it was exactly?”

I don’t think anyone disputes that the pass wasn’t taken inbounds or that Burrow was inbounds when he dropped it, but to me it’s pretty clear that the whistle sounded before the end of the game. Who knows, maybe Tre’von Moehrig loses Boyd in cover anyway and it’s still a touchdown, but to deny that the whistle was blown prematurely seems like an outright lie.

The video of the play is below, so you’ll be the judge.

It should also be noted that Sterator gene – of index card fame – said the play had an inadvertent whistle and should have been replayed.

Derek Carr’s emotional message after his loss to the Bengals