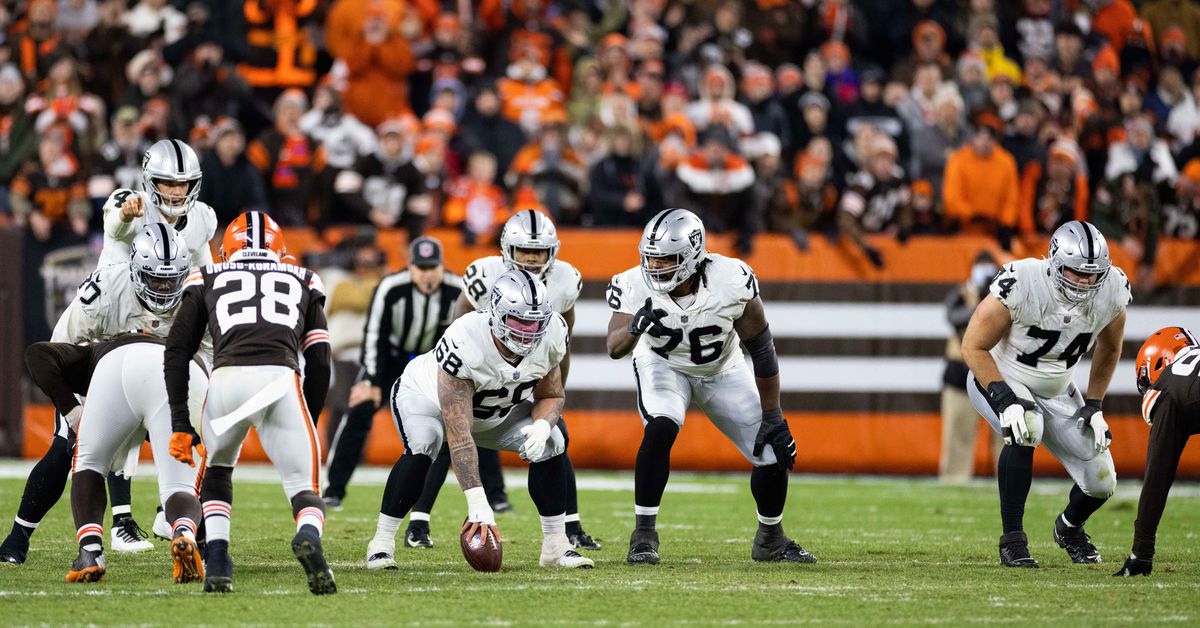 Raiders news: The offensive line will have a second chance of success

The Las Vegas Raiders offensive line has struggled for most of 2021.

The embarrassing start to the season led to quarterback Derek Carr suffering an ankle injury and a horrible rushing attack with linemen constantly ending the ground game.

There was an expectation surrounding the young band of an overhaul with these numbers. Raider Nation anticipated new faces and old ones New England Patriots players to fill holes on the offensive line. The offseason shows that the new regime has different plans as they continue not to seek outside help.

The re-signing of Brandon Parker came as a shock to most fans and then it was followed by the signing of Jermaine Eluemunor. The Raiders filling their room with previous players is surprising.

What is the reasoning for this?

As the season progressed, there was improvement across the board. The running game has become a crucial part of the playoff run, with Las Vegas leading running back Josh Jacobs averaging 4.7 yards per carry over the past four games. The 174 yards on the ground against the Los Angeles Chargers was a great performance from the offensive line.

This continued in the game against the Bengals. Jacobs had 83 yards on 13 carries, and the offensive line intimidated the Cincinnati Bengals defensive line uphill. The growth of the young offensive line was promising.

John Simpson and Andre James made the most significant jumps of the season. Simpson ranked 24th in the PFF rank among starting guards after the bye week. He hasn’t given up a sack or a QB hit during their four-game winning streak. The same can be said for James, who became stable in pass protection while learning to be an NFL center.

Brandon Thorn studied offensive line play and had this to say about James.

Raiders C Andre James is in this group in his third career season and his first as a starter. James steadily improved over the year and performed admirably after replacing one of the NFL’s top centers in Rodney Hudson. Letting Hudson walk into free agency and roll with the unproven James turned out to be a pretty smart move on the team’s part.

Leatherwood and Parker struggled, with their ugly performances against the Chiefs standing out the most. Parker and Leatherwood did well in the running game, but it seemed like a pass-first team with the guns on the outside.

The group improving as a cohesive unit could be a reason behind this. During the combine, technique was a topic, especially with sophomore Leatherwood. This quote from new Las Vegas coach Josh McDaniels on Leatherwood was interesting:

“I see him as a guy who’s played a lot of football. There’s a lot to assess. Playing as many games as you did as a rookie, there’s good and bad, but when you’re so young, wondering what can we work with, what can we fix? There’s a lot to do in this process. I’ve spoken to him before. This process is ongoing. I think what we’ll end up doing is is best for the Raiders – he showed the ability to play in both places, and more guard than tackle last year, but we see him being a contributor. We see him being a guy who we are really happy to work with. We will try to get the best out of him.

Former Raiders offensive line coach Tom Cable hasn’t developed a talent with technical issues with hands and other elements to create great blockers. Kolton Miller was the only player to reach his potential under the last coaching staff.

It could be a mistake made by overconfident coaches that has plagued many NFL teams. However, if they can fix the technical issues and help players get to the next level, it can become a great line for the next few seasons.