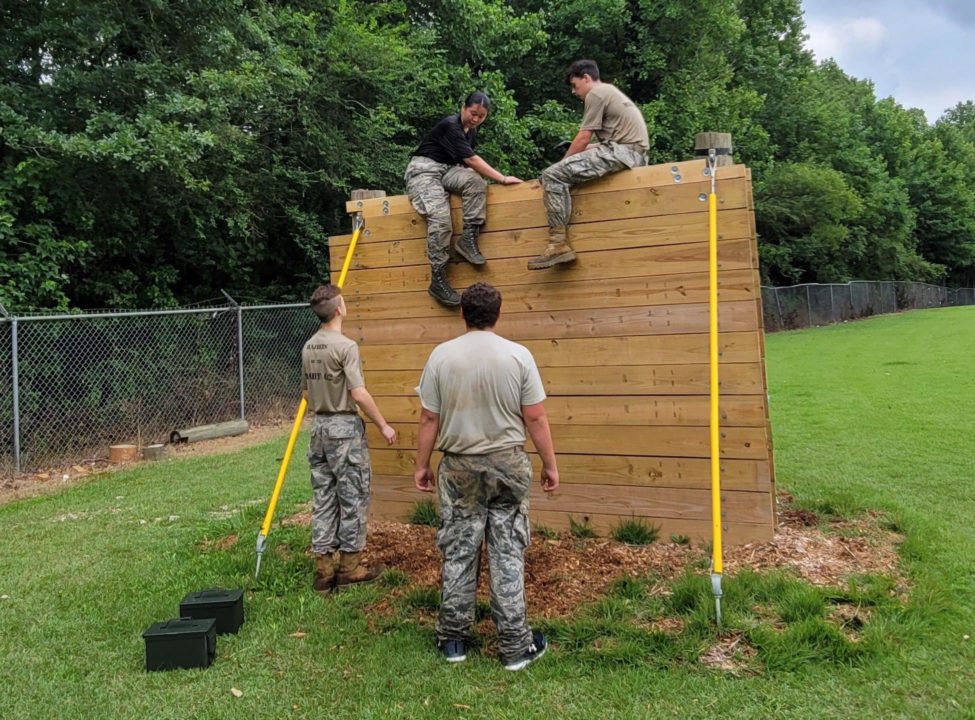 A new after-school program offered through Carrollton High School’s Air Force JROTC program is gearing up for its inaugural season this fall.

The AFJROTC Raider team spent part of the summer training for their upcoming competitive season. According to Lt. Col. Mike Farr, Senior Aerospace Instructor at CHS, Team Raiders is the most physically demanding program offered within AFJROTC.

“The cadets who participate seek to challenge their physical endurance and mental toughness, as well as build their leadership skills,” he said.

Farr said there will be competitions at the local and national level.

“Typically there will be some sort of fitness or individual strength test such as push-ups, curl-ups, tire drag or an obstacle course,” he noted. “It has been labeled as Army Ranger training at the secondary level – of course safety is paramount. We describe it as a mud race with miles of running and commonplace obstacles.

Master Sergeant McLain, an Aerospace Science Instructor (ASI) at CHS, has volunteered to serve as the head coach of the Raider team.

“I’m really excited about our Raider team,” McLain said. “My motivational saying is, ‘Don’t stop when you’re tired; you stop when the job is done! »

Cadet Lieutenant Christopher Zimmer is the captain of the Raiders team. He said he is looking forward to the upcoming season.

“Dream big and dare to fail, because if you don’t dream big, you’ll never know what you can achieve,” Zimmer said.

Other extracurricular programs offered by the CHS AFJROTC program are the Flight Academy Scholarship Program, CyberPatriot, Cyber ​​Academy, and Kitty Hawk and Space Society. The goal is to offer a range of programs so that all AFJROTC cadets can get involved.

The Air Force Junior ROTC Flight Academy Scholarship Program is an Air Force-level initiative in conjunction with the commercial aviation industry to address the national shortage of civilian and military pilots. The Flight Academy allows budding young aviators to obtain their private pilot’s license free of charge during an eight-week summer internship at partner universities. The scholarship covers transportation, room and board, academics, and flight hours needed to potentially earn a private pilot certificate. The scholarship is valued at approximately $23,000.

CyberPatriot is the national youth e-education program. The competition places teams of high school and college students in the position of newly hired IT professionals tasked with managing a small business’s network. During the competition rounds, teams receive a set of virtual images that represent the operating systems and are tasked with finding cybersecurity vulnerabilities in the images and hardening the system while maintaining critical services over a period of 6 hours. Teams compete for the highest ranking in their state and region, and the nation’s top teams earn all-expenses-paid trips to Baltimore, MD for the National Finals competition, where they can earn national recognition and scholarships. studies.

The Cyber ​​Academy is designed to spark interest in a vital skill set. In 2021, AFJROTC Headquarters announced funding for summer scholarships for AFJROTC cadets to complete an online Cyber ​​College course at select public and private universities. Selected cadets were identified through a competitive multi-phase boarding process. The scholarship funds a college course, which awards approximately three college credit hours upon successful completion. Cadet Malachi Thomas was selected, attended, and completed the Cyber ​​Academy last summer, making him the first candidate for the CHS Cyber ​​Academy.

Kitty Hawk Air & Space Society (KHAS): KHAS is the official academic honor society of AFJROTC. Established in AY71-72, KHAS is sponsored and supported by the Air Force Association (AFA) Foundation for Aerospace Education, KHAS upholds academic standards and fosters increased interest in academic achievement. Specifically, its purpose is to promote high academic standards and achievement as well as school and community service, to encourage self-confidence and initiative, to help develop leadership skills and to deepen knowledge. members on the role of the Air Force in aerospace.

CHS manager Ian Lyle said he was delighted to have the first CHS AFJROTC Raiders team competing this fall.

“Col. Farr and Mgt. McLain are doing a great job with our AFJROTC program at CHS and I can’t wait to see what this team of cadets will accomplish.