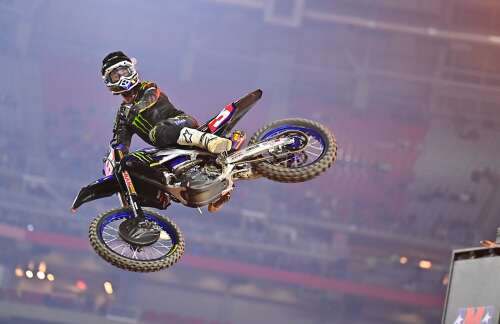 Eli Tomac of Cortez crosses the finish line in the first of three Supercross races on Saturday at State Farm Stadium in Glendale, Arizona. 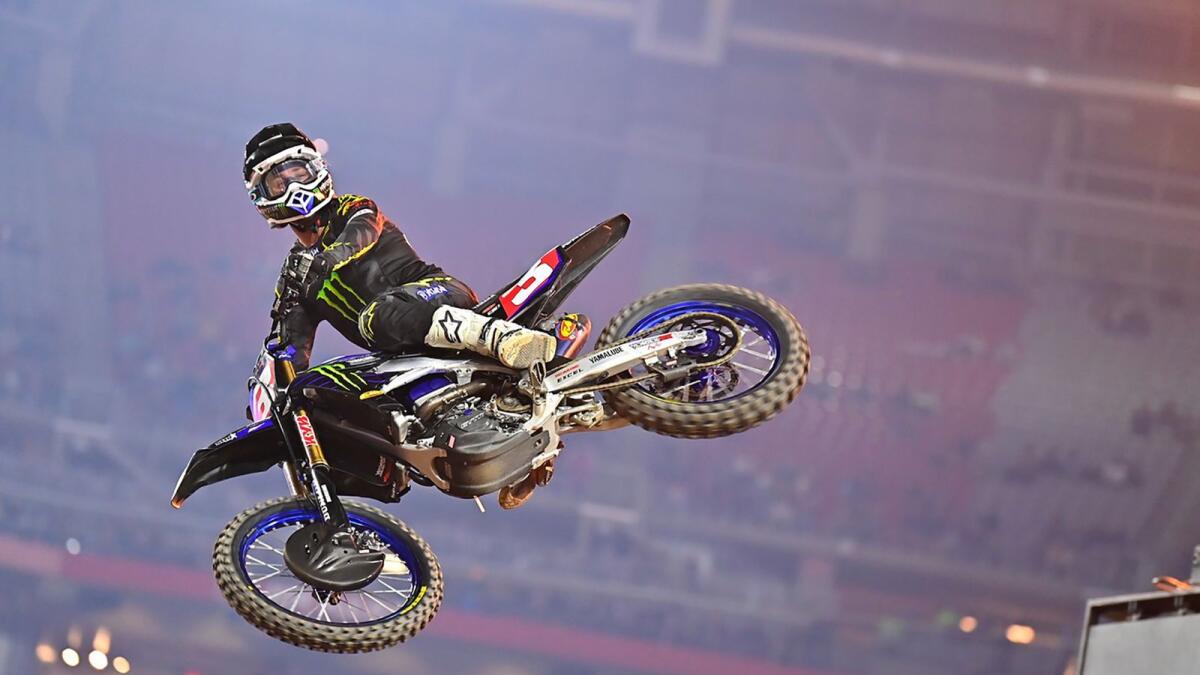 Tomac, who has been frustrated with his starts throughout his career, immediately took the lead in the first two races at State Farm Stadium and quickly extended his lead to easily finish in the lead.

He capped his two victories with a third-place finish in Saturday’s final Triple Crown race and was the overall winner.

After five races, Tomac leads the series with 111 points. Sexton is second with 100 points, followed by Anderson, with 96. Malcolm Stewart is fourth with 93 and Justin Barcia is fifth with 89.

With back-to-back wins at Anaheim 2 last week and Glendale on Saturday, Tomac became the first driver to win two races this season.

As the gate fell at the start, Tomac took the lead for the first time this season, and after one lap he led Ken Roczen by 0.697 seconds. Anderson was 3 seconds off the pace in third and was followed by Stewart and Marvin Musquin.

As Tomac increased his lead on Lap 3 to nearly 2 seconds, Stewart slipped into third ahead of Anderson, who continued to challenge from fourth.

But by the end of lap seven, Tomac had the race in hand, with a lead of 3.856 seconds over Roczen.

Anderson passed Stewart on lap 7, closed the gap to Roczen on lap 8 and passed him on lap 10. Stewart also passed the list Roczen, who dropped to fourth.

Anderson continued his late charge, but it wouldn’t be enough. After 13 laps, Tomac crossed the finish line 2.240 seconds ahead for his second win of the season, just a week after winning Anaheim 2.

Stewart finished third and Roczen and Musquin filled out the top five.

Dylan Ferrandis, the fastest qualifier of the day, finished seventh after starting from 12th place after one lap.

Tomac again got off to a fast start and took his apparent, but unofficial, second hole of the night. Anderson, the first main event runner-up, was second, followed by Stewart, Musquin and Sexton.

Anderson, trailing Tomac by 4.722 seconds on Lap 6, crashed and dropped to 18th in the 22-rider field. Sexton passed Musquin for third, but with 4 minutes to go Tomac was riding alone, 5 seconds ahead of Stewart on lap 8.

As the leaders seemed to settle and slip behind Tomac, Ferrandis, who started eighth, chased and passed Roczen on lap 11, to finish fifth behind Musquin and Sexton.

Tomac took fourth behind Sexton, Stewart and Cooper Webb, but passed Webb for third on the first lap.

Midway through the race, Tomac launched his pursuit of the leaders and passed Stewart for second place on lap 7, shooting within 4 seconds of leader Sexton.

Anderson, however, launched his own charge and passed Stewart for third on Lap 8, and passed Tomac for second on Lap 9.

Tomac and Anderson continued forward, setting their fastest laps of the race on lap 11. But as the checkered flag fell after 13 laps, Sexton finished 2.5 seconds ahead of Anderson for the win. Tomac was third, nearly 7 seconds off the pace.

Stewart and Webb filled the top five, over 10 seconds behind.

Because the Saturday race format at Glendale featured three main events, there were no timed runs. Each of the three 450cc triple crown races lasted 12 minutes plus one lap.

The Monster Energy AMA Supercross Championship Series returns to Anaheim, Calif., on February 12 for the last of three races at Angel Stadium, then heads east to US Bank Stadium in Minneapolis on February 19 for the seventh of 17 races. series.