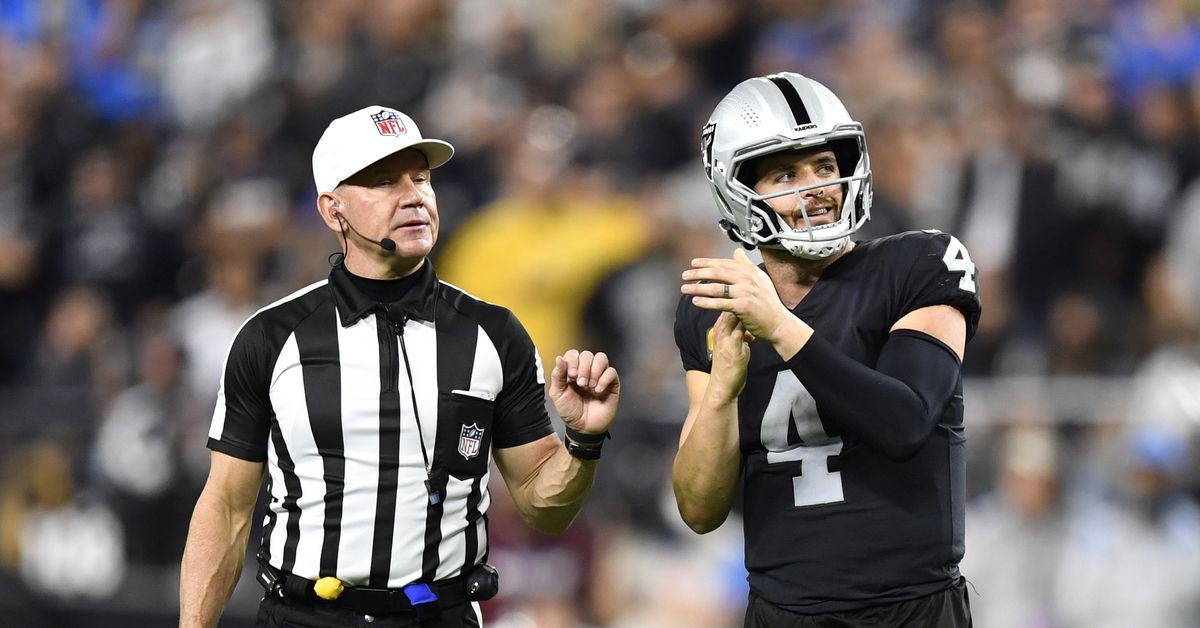 Each offseason, the Las Vegas Raiders and the other 31 NFL teams look for ways to improve. From free agency to NFL Draft and the training program, new ideas and innovation always play an important role in the functioning of the teams from March to August. Different teams will deploy different strategies, but all with the same idea in mind, to accomplish the goals they failed to achieve the previous year.

For the Raiders, that meant overcoming the hump and making the playoffs for the first time since 2016 and just the second time since 2002. As we know, they accomplished that feat and while there were a lot of factors in game, one that played a huge role was an innovative new training system called BlazePod.

“They actually got it originally from [Marcus] Mariota when he was there and his trainer was using them,” BlazePod business development manager Brian Farber said when I asked him how the Raiders found out about the new product. “And I think it’s become more like an understanding that it’s something that a lot of people are using. We just came back from the Combine, we have half the NFL using our products right now”

“I went to Vegas and presented while I was there…with my wife on one of her work trips. I had pods in my bag, and I basically texted and just went to the establishment…so I walked in, presented for about an hour. [Mariota’s trainer] liked the product and showed me what they were doing. And then I kind of showed them some stuff.

What exactly is this stuff that Farber is talking about? Well, let’s take a step back and explain what BlazePod is.

Company founder and CEO Yaniv Shneiderman came up with the idea for BlazePod while tasked with creating an interactive product for kids that encouraged them to be more active.

“It’s a bit like Simon Says on steroids,” Shneiderman told ISRAEL21c when discussing the inspiration for BlazePod. “The idea was to create a new experience of physical activity, combining physical and cognitive abilities. It’s fun and fun but also super tough and intense. It also moves something in your brain, which helps you improve your performance.

“We took it to the park and the kids loved it. It was then that we realized we had something unique.

BlazePod users receive six pods with LED lights that can change to one of eight colors. After downloading the app to their smartphone, users create a profile and are asked to choose their ‘main occupation/interest’ and ‘additional interests’. The categories start broad – Sports, Fitness, and Therapy – then become more specific where a user can select their sport of choice or preferred type of workout.

The app offers different exercises from there, all customized based on the selections made above. The drills are tied to the LED pods and when the user chooses their drill they are shown a diagram explaining how to set up the pods and a video with instructions on how the drill is supposed to be performed.

All BlazePod exercises are built around the same basic principle. One or more of the pods change color and this prompts the user to perform an action, whether it’s as simple as running from “cone to cone” – or pod to pod – or more complex where the user has to think then act. This is where cognitive training comes in.

Users benefit not only from physical exercise, but also from neurological training to help athletes, or simply fitness enthusiasts, tether their brains to their feet through motor skills. When I asked Farber how the Raiders use BlazePod in their off-season training, the cognitive aspect of the product was something that stood out.

“I don’t know what other exercises [the Raiders have] done other than my suggestions on decision making/neurological priming… different football drills like getting off the line fast or whatever,” Farber said. “And then it was more just about showing, like, the features of the light logics of the app, and then giving them a taste of it. So then they could just let their brains go wild, ‘Oh, I wanna say, I can do this, or I can do that,” and then they would just run with it.

I went on to ask him what position on the football field he thinks benefits the most from the product and his answer was simply the most important position in the sport.

“We just did a photo shoot at EXOS [a well-known fitness and athletic training company] and we were doing football-related exercises. We would do a snap where you hit the pod and like a three-step drop, and a quick release to a target that was lining up for a quarterback, and the quarterbacks that were there doing it were like s they didn’t want to stop.

“So I think the decision-making for a quarterback is probably the most crucial to maintaining possession of the ball and not giving up on interceptions and turnovers. So this piece, also the consistency in this release time. For example, if you get a quarterback who can outplay the others, you really have something in the NFL, and I think the most important would probably be a quarterback.

“But I think if you ask Jamal, who’s kind of like our football guru, he can say it’s the wide receiver because of the hands. He can say it’s the defensive line because of the hands. and they’re trying to get to the quarterback quickly. So that’s such a tough call. But I probably think when it comes to purely translating what BlazePod can do for neurons and making decision, I think the quarterback.

During our conversation, I also talked about the advantages of a running back and a defensive back.

Running backs, especially in a zonal-heavy scheme like the Raiders used last year, are challenged to find a hole and cut or rebound it. So the pods can be set up where one color flashes and tells the back to cut it in the middle, and a different color tells them to bounce it out. In this way, the athlete is put in a game situation where he is forced to make a decision in a split second and move accordingly, affecting cognitive and physical training in a single exercise.

As for the defensive backs, it is a completely reactionary position. Defenders don’t know what play the offense has called, so cornerbacks are forced to read a wide receiver route and act on it, making the link between cognitive and physical training extremely important.

Farber nodded in agreement and replied:

“You know, it’s interesting. Yes, there are a lot of technologies out there that are there to basically help with the cognitive part. The ability to emulate a game scenario, and what you should be doing in A vs. B, is pretty amazing.

“I think what our product does is so fun and cool, even for top athletes, they make millions and millions of dollars and feel like kids again when they use it. And I think that’s It’s because they want to outdo their friends. And they want to be the best because that’s who they are deep down.

Two things about Farber’s quote above struck me as important aspects of BlazePod, the pro athletes becoming kids again, and the element of competition.

As a reminder, the product was inspired and tested by children with the idea of ​​creating something fun and encouraging them to be active. Being able to compete with others is how Shneiderman and Co. achieved this goal.

BlazePod’s app allows the primary user to create other “players” or profiles if they have a training partner, or if the primary is a trainer or trainer who works with multiple athletes at once. The exercises can be configured so that up to four people can perform them at the same time and compete in different games. Their scores or times are tracked through the app and the competition – and subsequent disputes over who cheated – can begin.

Being able to compete was a driving force behind the development of BlazePod.

“I wasn’t part of the early development conversations, so I can’t say for sure. But I know the people who were behind it, and I know their personalities, and I know they were looking to create competition,” Farber said.

“When it comes to cognitive training, you’re competing with yourself when you repeat the exercise…I can walk into our office, set up an exercise, and compete with my previous score that’s written on the ranking… You can use it to rate yourself, and you can use it to rate your team or your clients or whoever. So the competition factor is totally there because of the metrics we collect in the app where you can see it.

Right now, users can’t compete against people outside of their “group”, but it’s something the BlazePod team is working on as they continue to develop the product.

“It takes a bit of a head start on us here, but at the same time it happens… We really work so that you can do it at home and compete with me here in my office or at my house and have real consistent data where we can say I beat you, or you beat me.

“And it’s going to be a really big piece for us because it’s been in high demand. Our customers drive a lot of the decisions we make, because when there’s smoke, there’s fire, right?

“We want to continue doing what we do and conquer the world of sports fitness, neural training. It’s only been a few years and we’ve already made a splash in the sporting and sporting goods world. I think the more stuff we create and where our product pipeline takes us, it’s just going to make us that much more impactful.

To learn more about BlazePod, how it can be used for other sports beyond football, and for pricing information, visit blazepod.com.