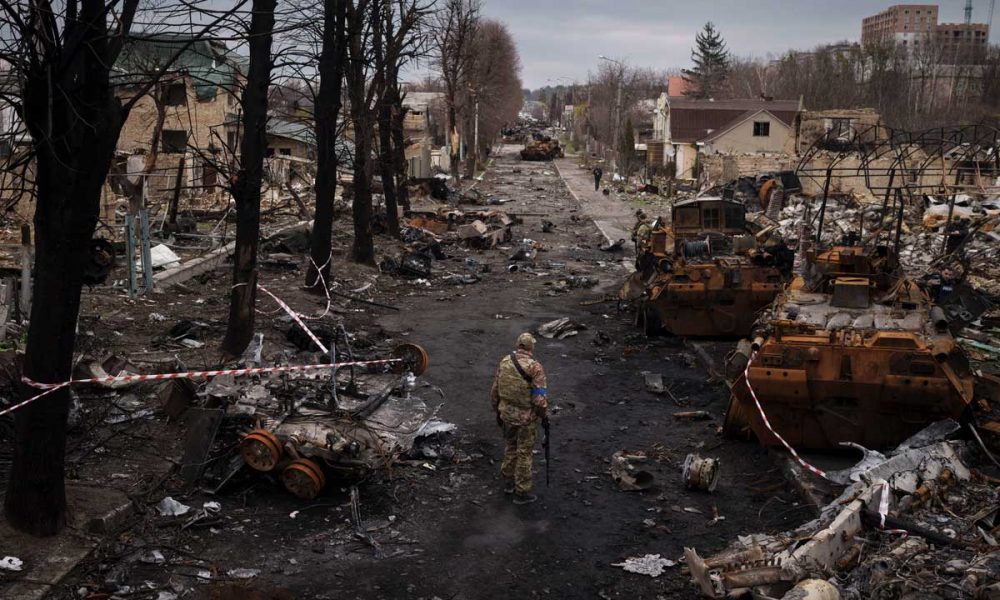 Photographers from The Associated Press and other agencies have documented Russia’s invasion of Ukraine since the war began on Feb. 24, 2022. Here are the latest images depicting heroism, terror and calls for ‘aid :

Cemetery workers load the corpses of civilians killed in Bucha onto a truck, to transport them to the morgue, on the outskirts of kyiv, Ukraine, Wednesday, April 6, 2022. (AP/Rodrigo Abd) 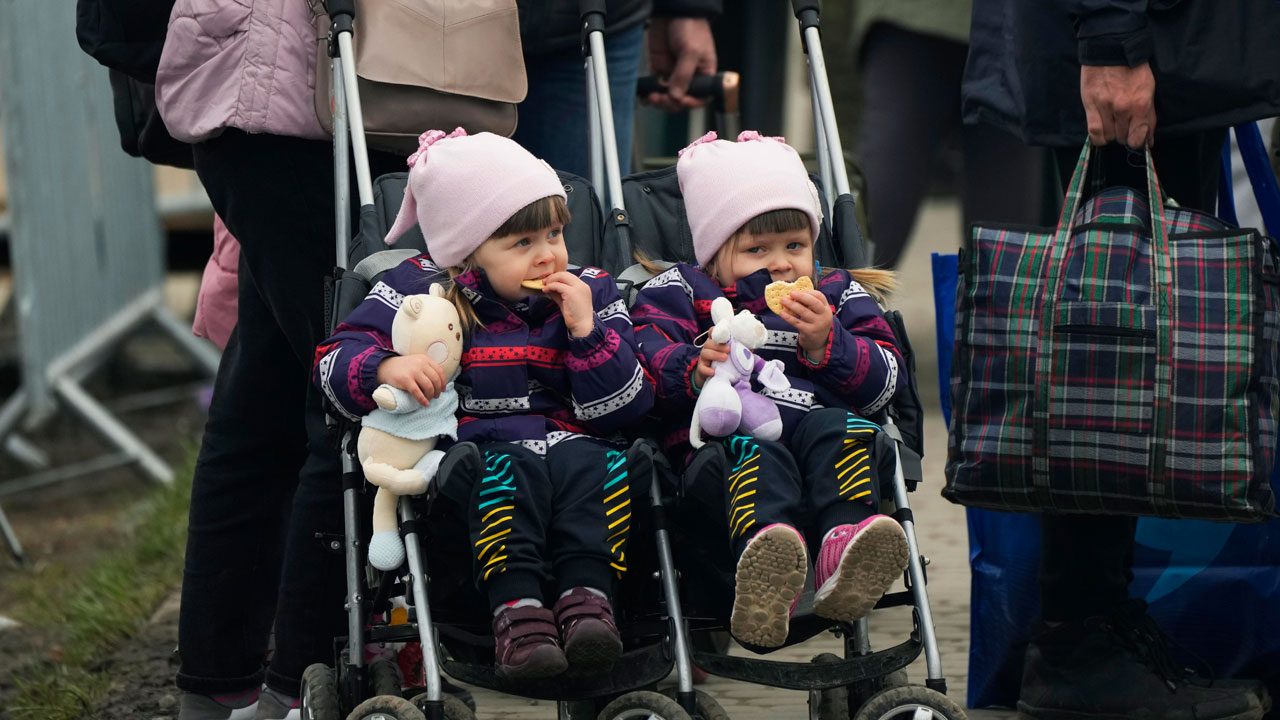 A woman with two children waits in line after fleeing war from neighboring Ukraine, at the Medyka border crossing in southeastern Poland, Wednesday, April 6, 2022. (AP/Sergei Grits)

The Russian missile is “for children” 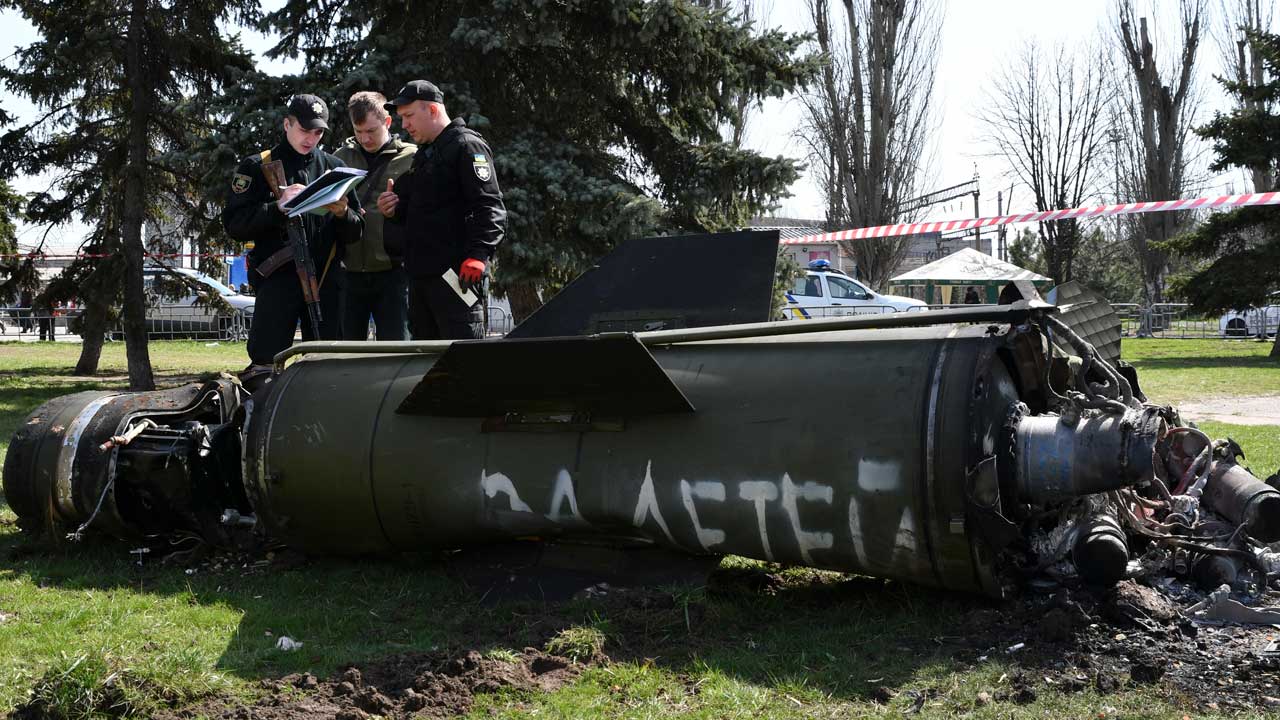 Ukrainian servicemen stand next to a fragment of a Tochka-U missile with the inscription in Russian “For children” after the Russian bombardment at the train station in Kramatorsk, Ukraine, Friday, April 8, 2022. (AP /Andriy Andriyenko) 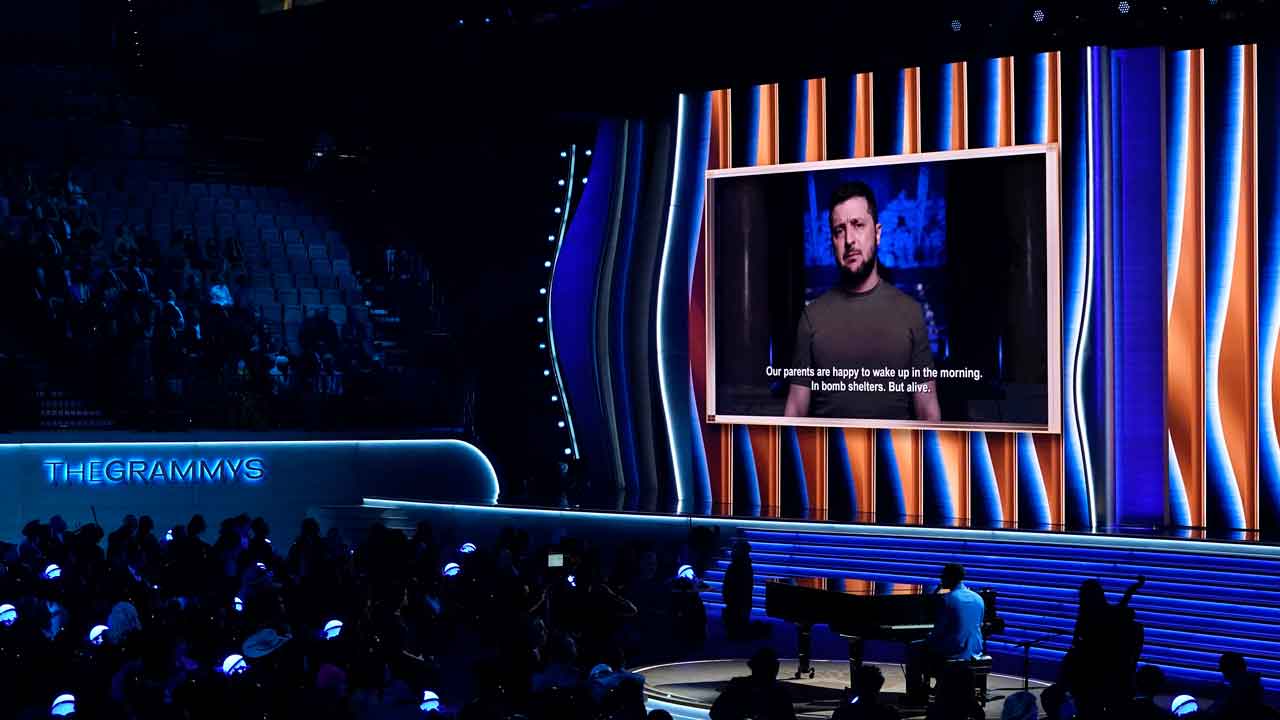 On the way to the front lines 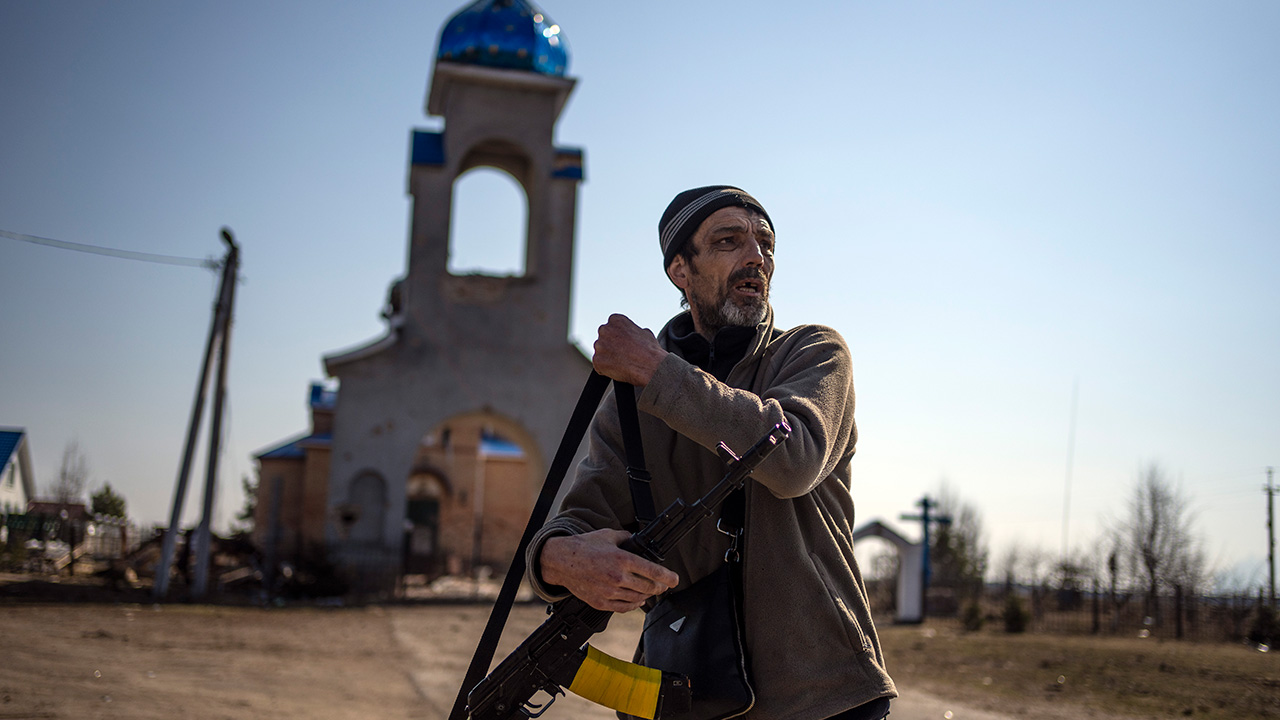 A member of Ukraine’s territorial defense unit prepares to go to the front line in Yasnogorodk, on the outskirts of kyiv, Ukraine, Friday, March 25, 2022. (AP/Rodrigo Abd)

Life turned upside down in a split second 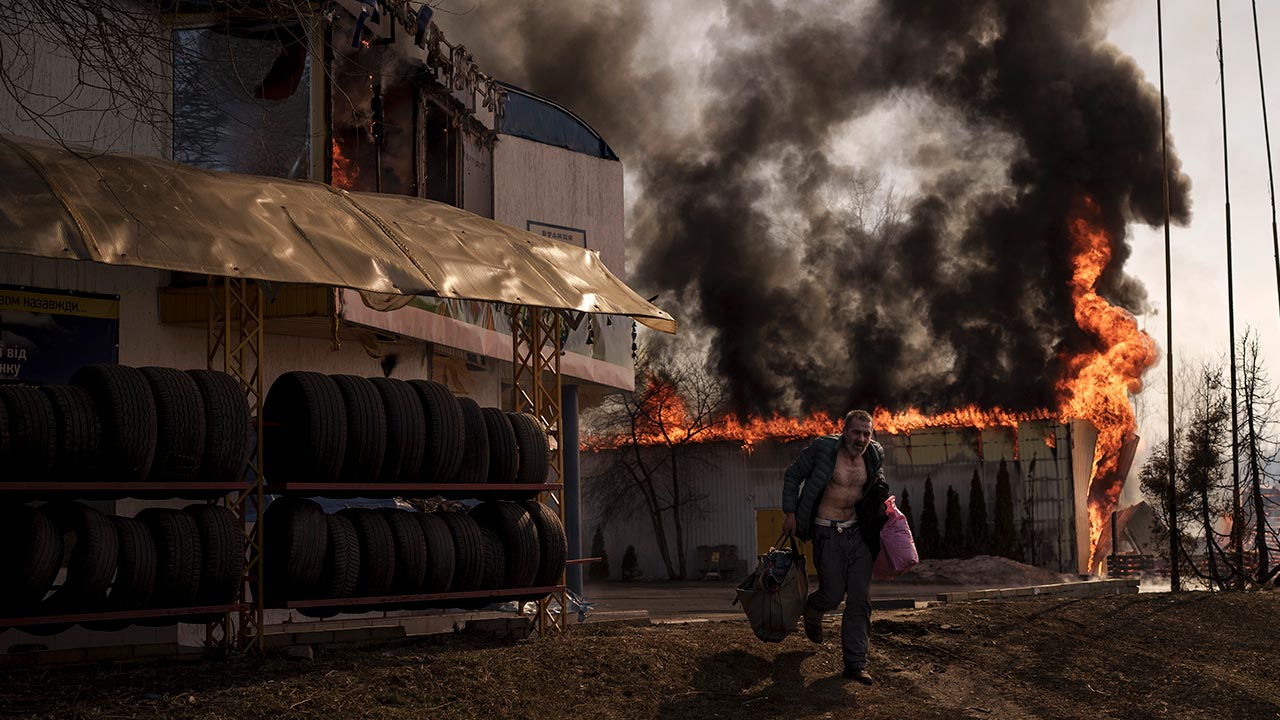 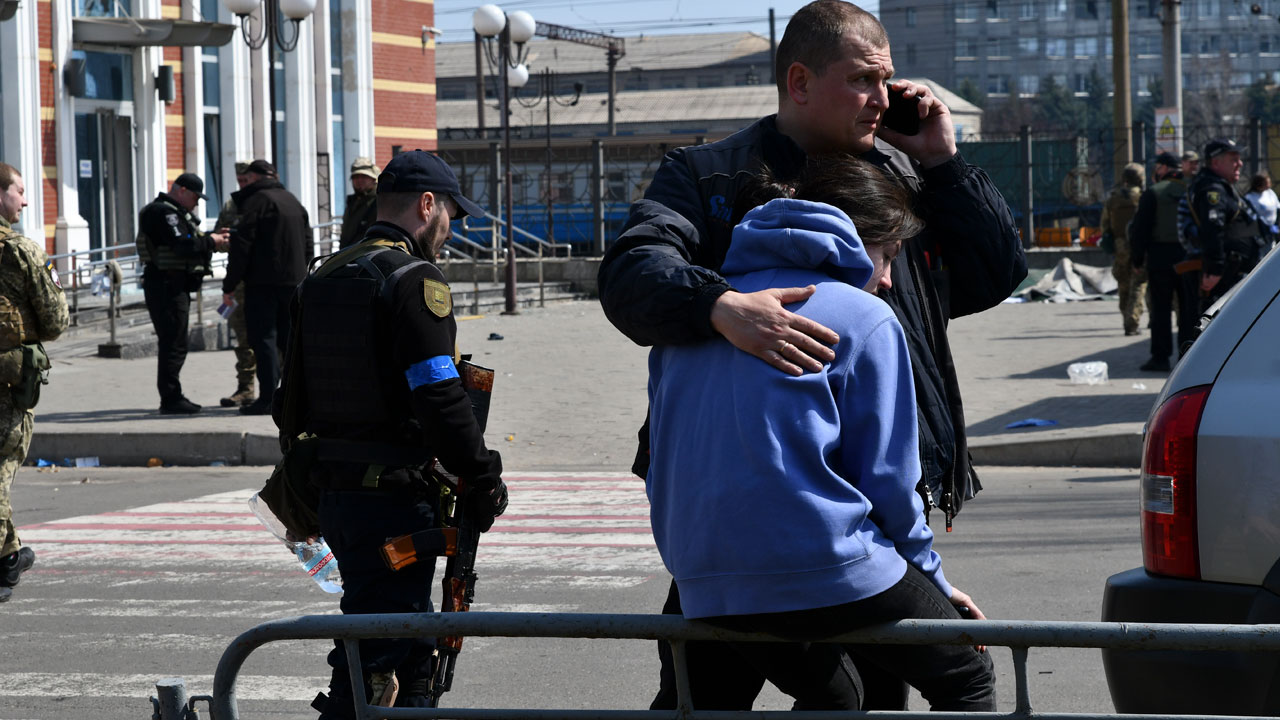 A man kisses a woman after a Russian shelling at the train station in Kramatorsk, Ukraine, Friday, April 8, 2022. (AP/Andriy Andriyenko)

She didn’t make it inside 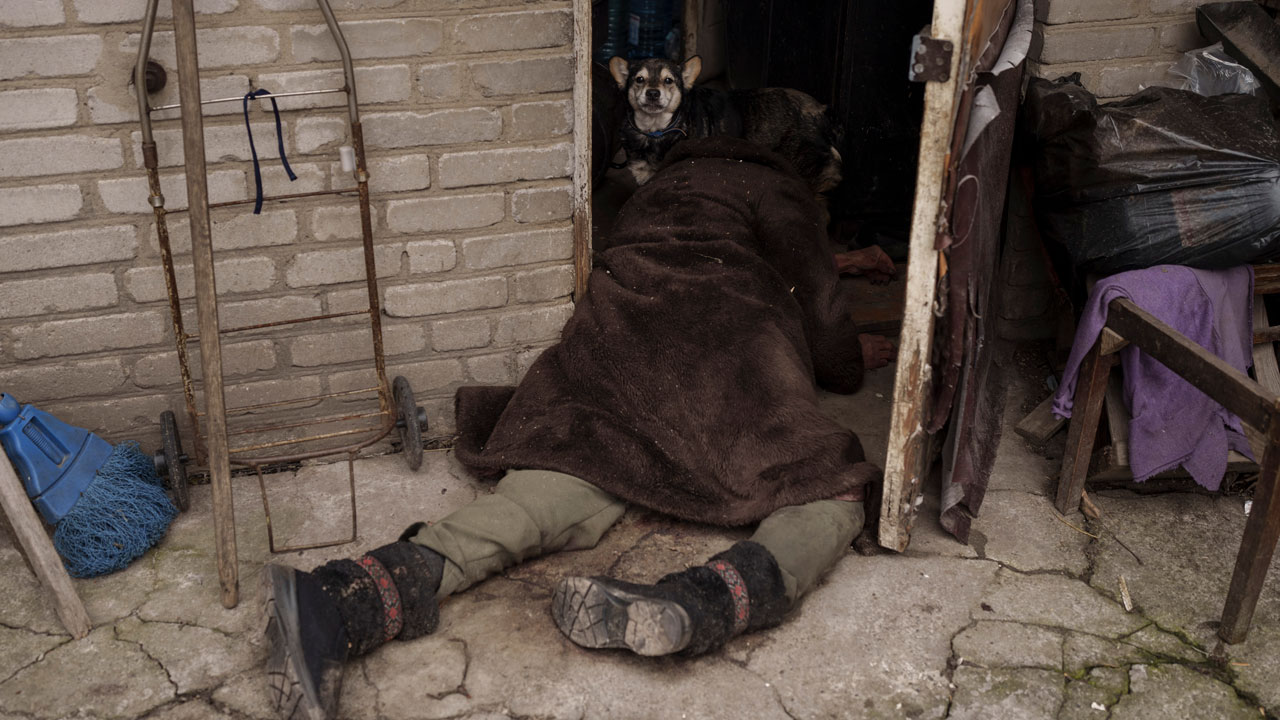 A dog stands next to the body of a slain elderly woman at the entrance to her home in Bucha, on the outskirts of kyiv, Ukraine, Tuesday, April 5, 2022. (AP/Felipe Dana) 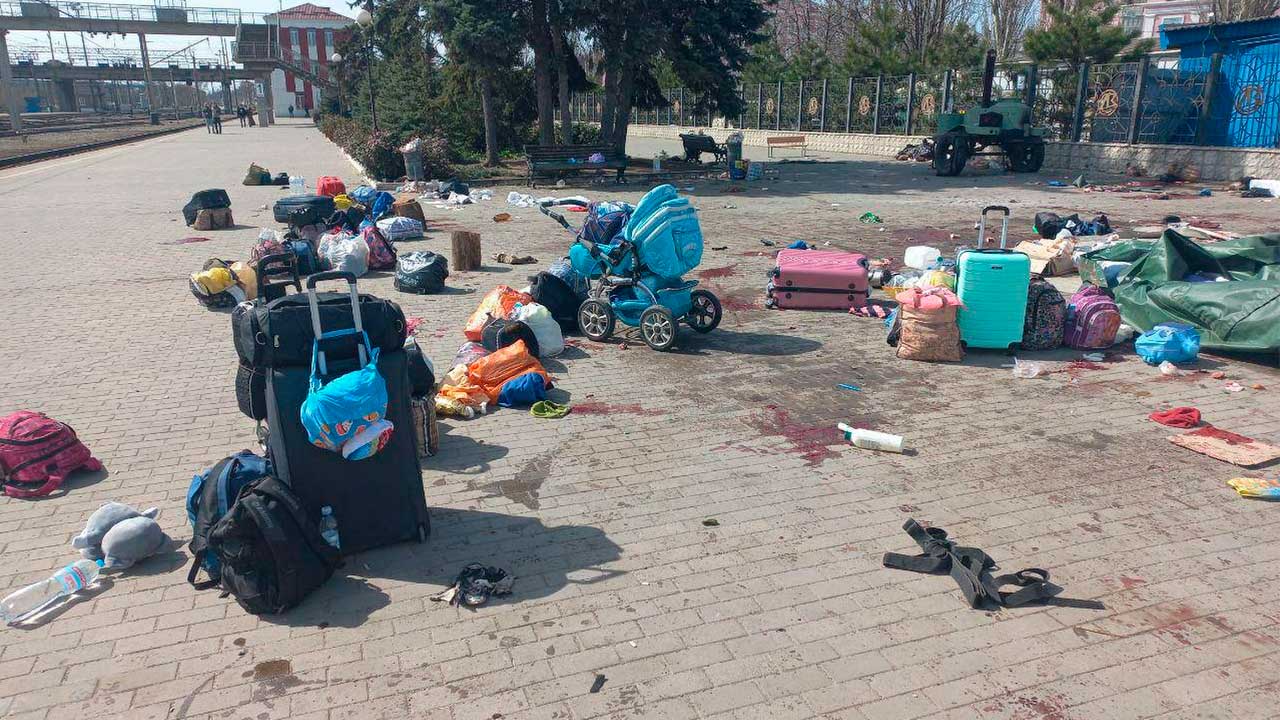 Another round of failed peace talks 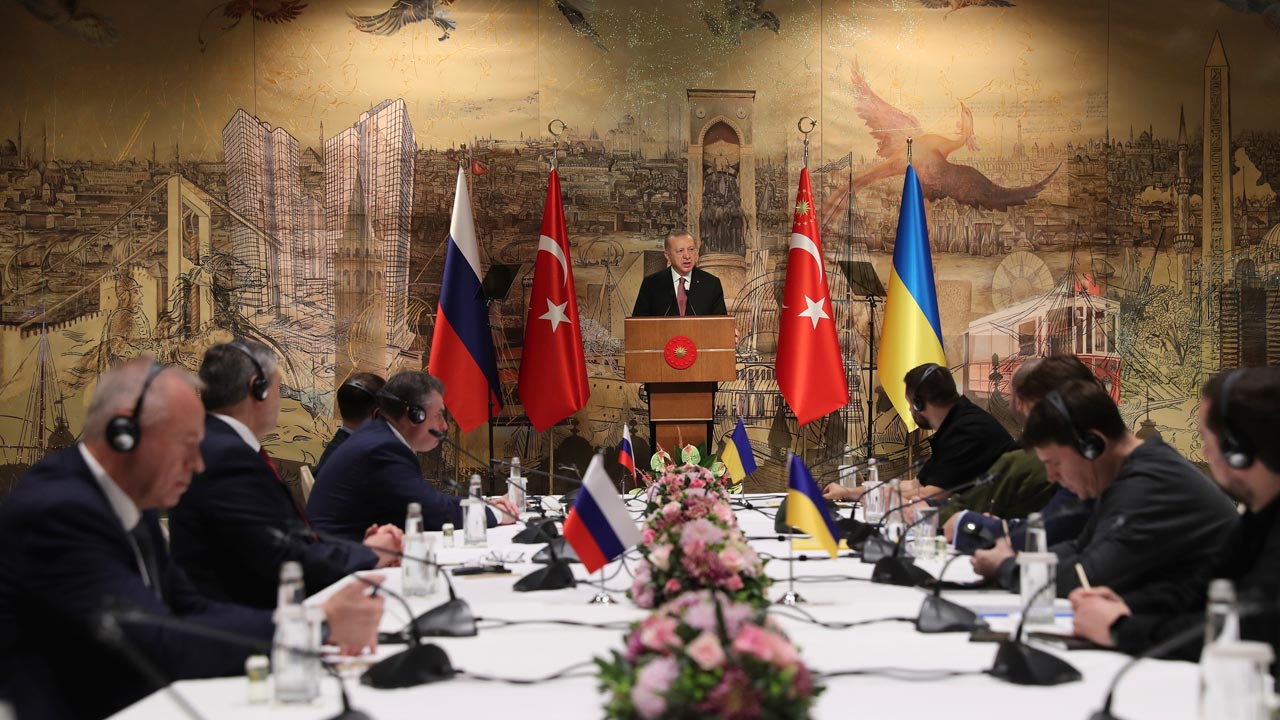 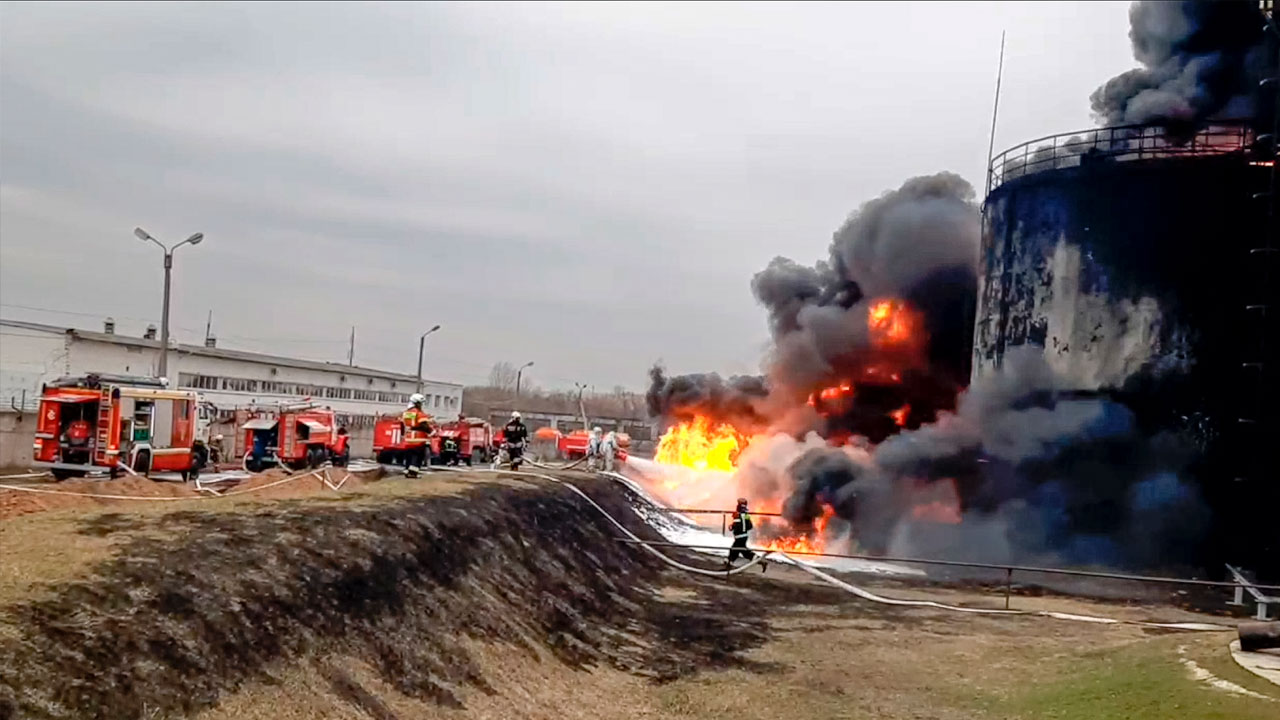 Firefighters work at the site of a fire at an oil depot in Russia’s Belgorod region on Friday, April 1, 2022. Belgorod’s governor has accused Ukraine of flying helicopter gunships over Russian territory and of hitting an oil depot. (Russian Emergencies Ministry Press Service via AP)

Ukraine wins the Battle of kyiv 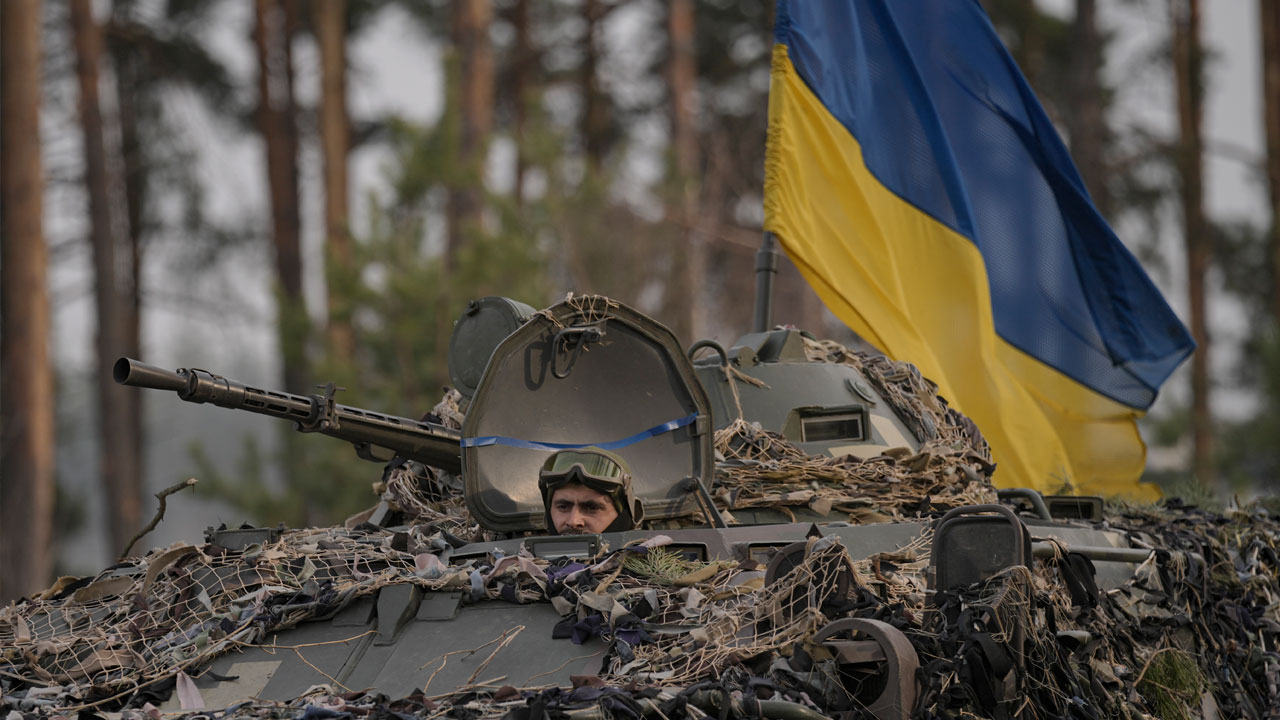 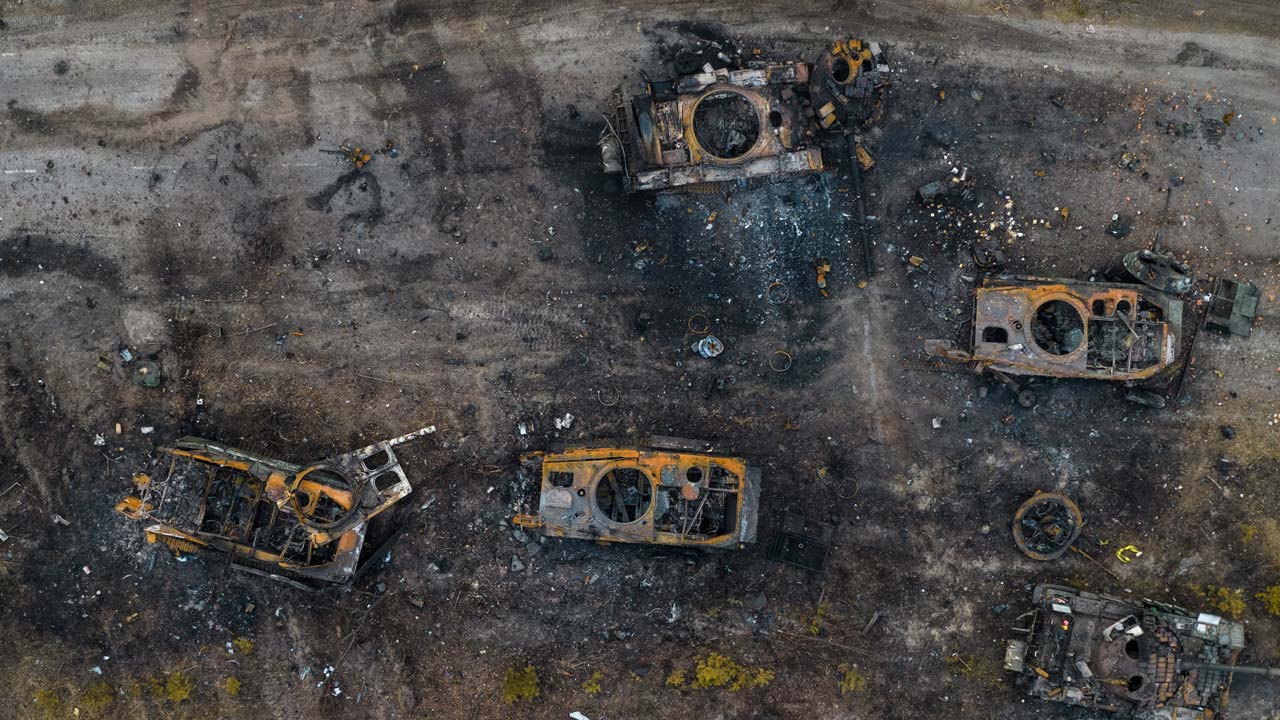 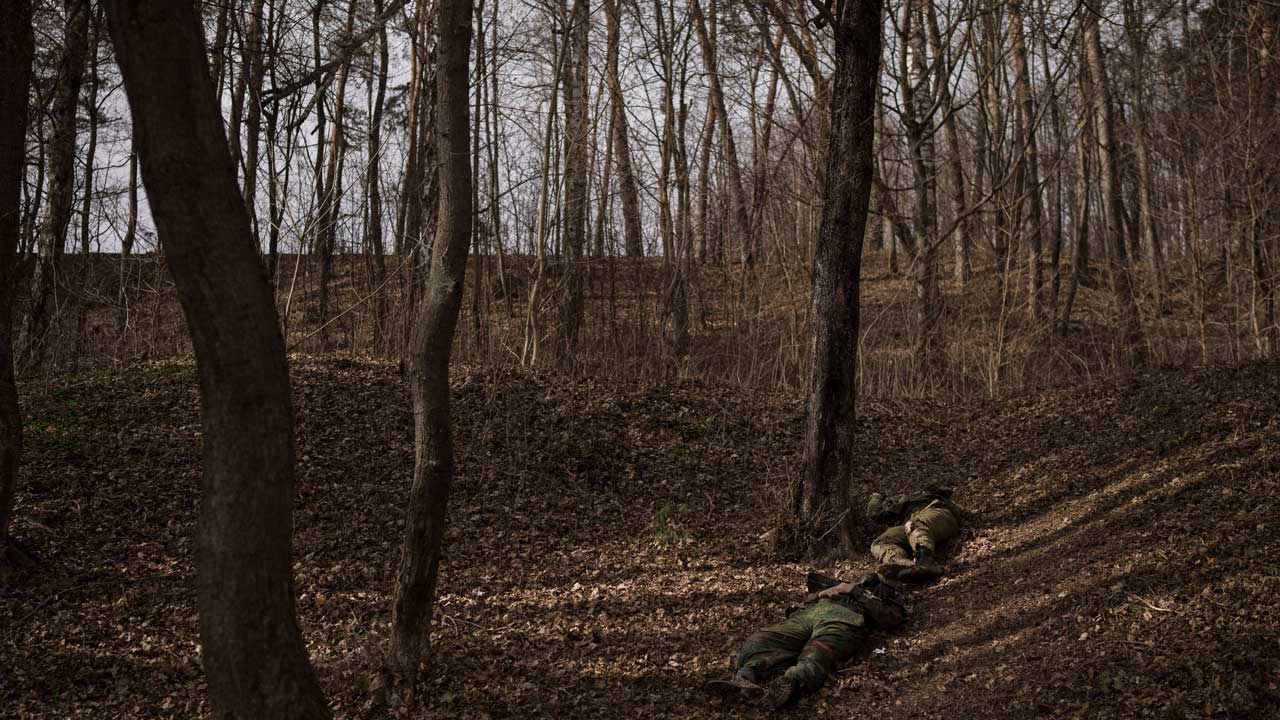 The bodies of two Russian soldiers are seen in the woods in Trostsyanets, Ukraine, Monday, March 28, 2022. Trostsyanets was recently recaptured by Ukrainian forces after being held by Russians since the early days of the war. (AP/Felipe Dana)