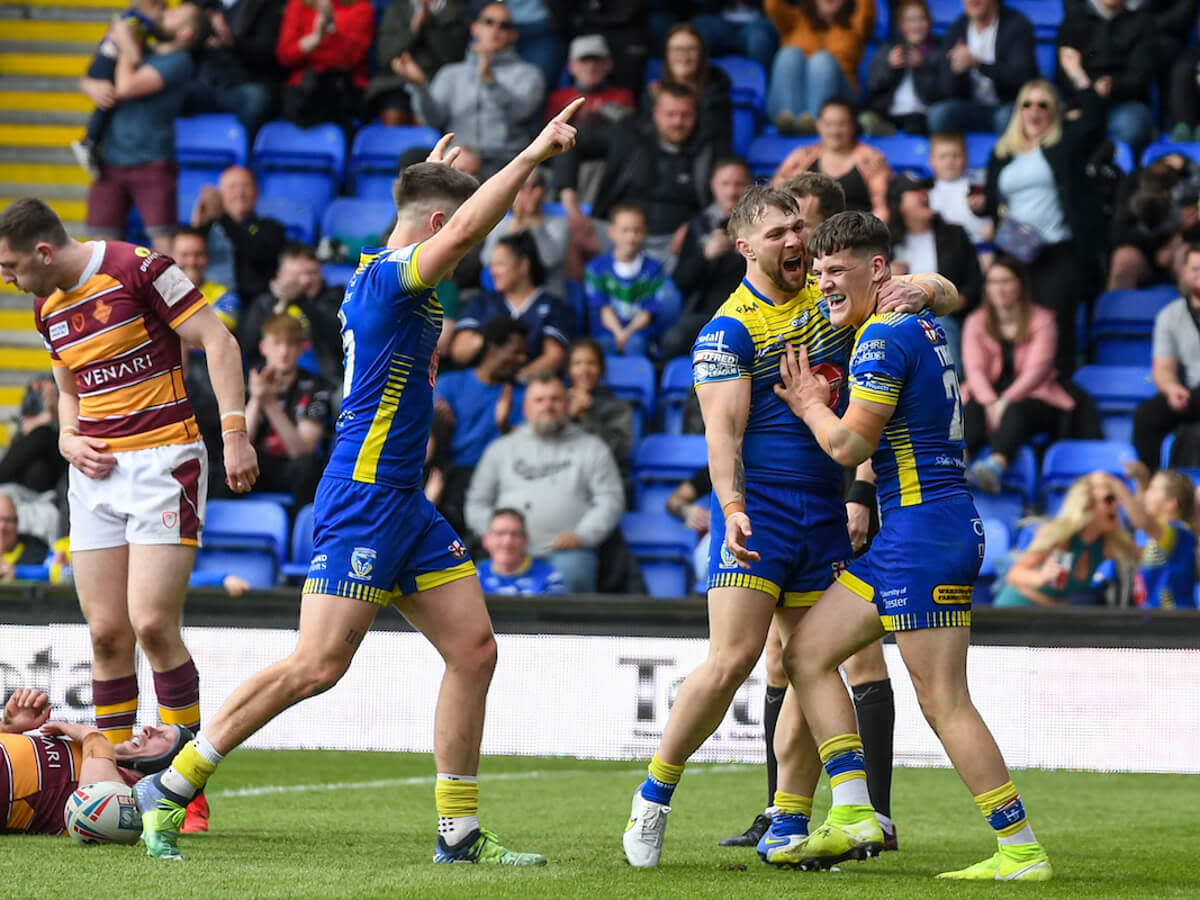 Warrington Wolves have secured back-to-back home wins after a comprehensive win over Huddersfield at the Halliwell Jones Stadium.

Huddersfield responded with tries Innes Senior and Luke Yates. But the damage was done for them in the first half as they had two periods with 12 men on the pitch.

Warrington made five changes to the side which were narrowly beaten by Hull FC on Easter Monday. Stefan Ratchford, Gareth Widdop, Jack Hughes, Jason Clark and Ellis Longstaff have all made their mark. The replacements were Connor Wrench, Riley Dean, Oliver Holmes, Matt Davis and Billy Magoulias.

Meanwhile, Huddersfield made four changes to the side which lost to St Helens. There have been returns for Jermaine McGillvary, Jake Wardle, Ricky Leutele, Chris Hill and Chris McQueen in the side. They replace Louis Senior, Adam O’Brien, Nathan Mason and Sam Hewitt.

Just seven minutes later, Huddersfield shot themselves in the foot. Jack Cogger was trashed after holding off Matty Ashton after the Warrington winger’s break was scrapped.

Four minutes later, Warrington was able to take advantage. They were stopped just short of the line, but Josh Thewlis reached the mock half on the next play to open the scoring. Riley Dean’s conversion attempt hit the post.

The hosts then doubled their lead just before halfway in the first half. They worked the ball to the left, and Thewlis managed to get over a small gap and pass his second. Dean couldn’t find the target on his first attempt, but referee Robert Hicks gave an eight-point try, giving Dean the chance to get out of bounds in front of goal, which he took. Cogger was also sent to sin bin for the second time.

As half-time approached, Warrington netted his third try of the afternoon. The ball was kicked towards the end zone, and the rebound fell nicely for Toby King, who managed to plant the ball. Dean scored the conversion to open a 16-point lead.

Shortly after, Huddersfield conceded a penalty from just over 30 yards out. Dean opted to go for the two points and he scored to extend the lead to 18 points.

The Giants needed to score next, and they did just at halftime. They fed the ball to Innes Senior, who managed to cut inside and recover. Olly Russell’s conversion attempt went off the rails.

It took a bit of time for the second half to come to life. But it was Warrington who scored the next crucial try just before the hour mark. They worked the ball to the right and Connor Wrench was able to show his speed to cross the gap and score. Dean couldn’t add the conversion.

With 15 minutes left on the clock, Warrington added another with an academy try. Dean sent a tricky kick down the middle and Thewlis ran over it and went to complete his hat trick. Dean then added the conversion.

Warrington quickly added his sixth try to show his dominance. Ben Currie managed to close a gap and score wide. Dean hit the post for the second time with his conversion attempt.

With less than five minutes remaining, Huddersfield were awarded a consolation try. Luke Yates managed to crash at close range. Russell scored the conversion to take the Giants to double digits.